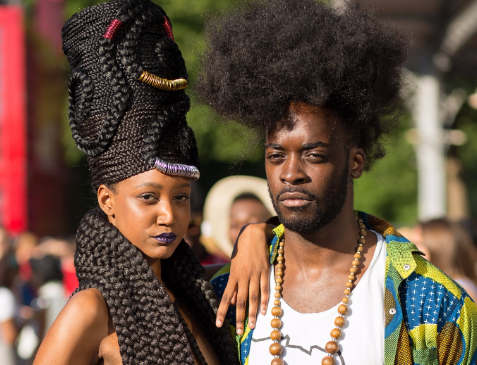 More than a festival, Afropunk is a movement and the only international event that celebrates black excellence; or rather the excellence of being black. Above all, this concept raises the fundamental question: What is being Black? Or rather, how to be Black in a dull society that applies to put everyone in a box? The third edition of the Afropunk Fest Paris on the 15th and 16th of July 2017 in the Halle de la Villette was the opportunity to dive back into this concept.

Afropunk, an empowering festival that aims to conquer the black conscience.

There is no equivalent in the French language to transcribe the idea of “Blackness”. We can translate roughly by the expression of being proud to be Black. This expression is like a cry, like to say that one is Black and Proud, because of the energy expended to weaken, degrade, destroy the black man and woman throughout history. In Europe, particularly in France, the concept is more abstract because built on a contradiction between the stereotype, which makes an individual to be this or that according to his skin color and presupposed origins. And the individuality of the singular path of each Black person, trying to look like what his peers seem to expect from him, and also trying to assert himself in his identity. But what does being black mean? Can this amount of men and women be restricted to a single vision? Obviously not. But stereotypes and absolutisms having thick skin, the black communities have enclosed themselves in this categorical definition : the anti-uncle Tom (Black “sell-out”) is based on what the industry wanted, a man with a exacerbated fake virility, which appears as the dangerous and macho gangster. The caricature of the rapper, the term rapper obviously regrouping all Blacks making unclassifiable music in the variety department. We grouped them under a banner called “Hip-Hop”, with all the disregard that this gutted concept implies, to promptly derive to “Ghetto”, more explicit in the dominant idea. Thus, the validated Black became “the Black Ghetto.”

Hip Hop is a powerful musical and societal movement which has done much for the promotion of African Americans in the music industry. Above all, it helped bring to scale the demands of inner city youths in the United States. Aware of the power in this black sociological creation, the United States and later other countries, committed themselves to only reduce it to the music, and reap all the profits. Nevertheless, the popularized image of the Black only good at rap (to compete with sport) was the imaginary that arranged well. Then, for other reasons more loyal to the true reason of being of the movement, the black communities actually took ownership of it, sometimes exaggerating, reducing themselves to that. Thus, the ordinary Black is claiming Hip-Hop, rejecting any other form of Blackness.

The rocker not being a “real” black, the punk even less, not to mention the black into classical. An additional and unnecessary subdivision which divided more these blacks already so little united. In short, the “non-hip-hop” were set aside, excluded from their fundamental and inherent right to articulate their black condition, different from this construction. Yet, as the music lover Disiz reminded in his interview with NOFI during the  Afropunk Fest in Paris on the 15th and 16th of July 2017; to consider rock, pop and other musical movements like the music of “whites” denotes a severe lack of knowledge of the essence of this music which take their source in the Black genius. In 2003, James Spooner’s documentary Afropunk highlighted that part of the community rejected for her punk-rock look, his particular way of life, its references and sexual orientations. For indeed, the issue of homosexuality, particularly its total and complete rejection, has always occupied an important place in the vision of blacks in general and hip-hop environment in particular. The work of James Spooner demonstrated this lack of understanding of the extent of black culture and thus the diversity of the black communities. It generated a real awareness of this assimilation manufactured industrial model and encouraged further research and questioning of this grotesque conviction.

The Afropunk concept is the expression of art through self-expression. In Brooklyn, The americans Jocelyn Cooper, her partner Matthew and a French ex-pat in the US at the time, Lou Constant Desportes, initiated a cultural movement: the Afropunk festival. An event that automatically became an unmissable annual black culture. Brooklyn, New York, London and Paris for three years. The Afropunk is, the revalorisation of indifferent communities sometime opposed, reunited into an attractive and inspiring panel of a black community in its diversity. A philosophical movement, a timeless space where beauty and black talents are expressed in perfect harmony. No judgment, no complex, no denial. The Afropunk is about being yourself and celebrate. The next edition will be held in Brooklyn on August 25.

We are not one; we are many individuals capable of becoming one when necessary.